Hopkins alumni are inducted into the Hopkins Athletics Hall of Fame two years after being selected for the honor.

Nine Hopkins alumni athletes were inducted into the Johns Hopkins Athletic Hall of Fame on Sept. 17, following pandemic-related delays after being selected in 2020. The inductees range from swimming, wrestling, lacrosse, track and field, soccer and baseball with alumni spanning from the class of 1983 to the class of 2008.

This class of inductees raises the total number of members to 194 and marks the 24th class inducted into the Hall of Fame, which was formed in 1994.

Harvey Allen, a class of 1983 graduate, was a top performer on the Blue Jays swim team. As a 13-time All-American and captain, he helped lead Hopkins to four consecutive top-five team finishes at the National Collegiate Athletic Association (NCAA) championships with six national runner-up finishes. In addition, at the conference level, Allen helped Hopkins win four consecutive Middle Atlantic Conference titles, which were part of 28 consecutive conference titles for the team.

Kerrie Cathcart, a class of 1997 graduate, was the first recruit in women’s soccer program history and one who helped the program ascend to national prominence over her four years here.

Though only winning two games her freshmen year, she ended her career with 77 points and 32 goals, ranking 8th and 9th in school history respectively, and winning the first Centennial Conference title. In addition, she was the first Blue Jay in program history to earn All-Centennial honors with three conference honors, one second-team selection and two first-team selections.

Eric Fishel, a class of 2008 graduate, ended his four-year wrestling career with many firsts in a more than 70-year-old program. With a record of 95-36, Fishel became the program leader in wins and the first to reach 90 wins.

He remains the only wrestler to have 10 or more pins in more than one season and one of two to win 24 or more matches more than three times throughout his collegiate career. Amongst his other firsts, he was also the first to win two Centennial Conference titles and the first All-American in school history with his eighth-place finish at the NCAA championships in 2008.

Lacey-Leigh Hentz, a class of 2005, ended her four-year women’s lacrosse career as one of the top defenders in the nation and led the program to its first NCAA Division I tournament birth. She came into a team whose success revolved around offense and transformed it into a nationally recognized team.

Hentz earned First Team All-Conference Honors all four seasons in addition to a third team Intercollegiate Women's Lacrosse Coaches Association All-American and First Team IWLCA All-Mid-Atlantic selection. As a recipient of the Catherine P. Cramer Award for the top senior female athlete, Hentz remains the single-season and career record-holder at 54 and 146 respectively and ranks fifth in program Division I history in ground balls at 174.

Gary Kane, Jr., another class of 2005 graduate, is one of the most accomplished goalies in Hopkins Men’s Soccer program history. In his four-year starter history, he played a program record of 79 games, with additional records in his 6,745 minutes played, 66 career wins, 34 shutouts and lowest goals scored against average at .574.

Dave Marr, class of 1996, is one of the greatest attack players to come out of the men’s lacrosse program. As a two-time United States Intercollegiate Lacrosse Association All-American and team captain his senior year, Marr led the team to a 41-16 record with four NCAA tournament appearances and three semifinals appearances. Marr holds the program record for assists at 134 and ranks ninth in points in school history at 193.

Paul Rabil, class of 2008, is one of the greatest men’s lacrosse players in school history. With four All-America honors and the school leader in goals, assists and points in the NCAA tournament, Rail led the program to two NCAA championships in 2005 and 2007 with a total of three NCAA finals appearances.

As one of the best midfielders in school history, Rabil won the McLaughlin Award as the nation’s top midfielder in 2007 and finished his career as the only midfielder with more than 100 goals and 60 assists. In addition, he would become one of two in program history to earn Academic All-America honors twice. Rabil finished his accomplished career off with a total of 111 goals, 67 assists for 178 points leading Hopkins to a 49-15 record.

Bobby Van Allen, Hopkins’ current Men’s and Women’s Track and Cross-Country head coach in his 23rd season, is one of the most successful coaches in NCAA history. With the women’s cross country team he has won a Division III record-tying seven NCAA titles with a three-peat in (2012, 2013, and 2014). In addition, under Van Allen’s guidance, the track teams have earned over 30 Centennial Conference championships and over 20 Academic All-America honors. In his career here so far, Van Allen has earned more than 30 Coach of the Year honors including six National Coach of the Year selections.

Paul Winterling, a class of 2005 graduate, is one of the greatest performers in the Hopkins baseball program. With top five records in five categories and a Centennial Conference Player of the year selection, Winterling helped lead Hopkins to a 141-29 record over his four years with three NCAA tournament appearances, and three Centennial Conference titles.

The Hall of Fame committee also presented three recipients with the Distinguished Service Award. The award was established in 2016 to recognize candidates who have had outstanding contributions or service to the Department of Athletics and Recreation.

Neil A. Grauer is a class of 1969 graduate and an alumni of The News-Letter who has been a long-time supporter of the athletics department. As a member of The News-Letter staff his freshmen year, Grauer created the famous cartoon Blue Jay known as the “NAG Jay” which gained popularity throughout the Hopkins community, most notably with the lacrosse program and became the logo for the Department of Athletics till 1995. In addition, Grauer presents men’s lacrosse graduates every year with custom-drawn NAG Jays. He also received the Richardson Award for outstanding service to the Blue Jay lacrosse program in 1983.

Irv and Cathy Litofsky are the other two recipients of the Distinguished Service Award. As tenured members of the pep band, the husband-wife duo has dedicated more than 50 years to supporting Hopkins athletics, appearing at countless lacrosse, including nine national championships, and various football games. Irv is a class of 1973 graduate and joined the band his freshmen year. He was later joined by Cathy, his then-girlfriend, in 1976. The duo also received the Richardson Award in 2009 and continues to be found behind the home bench on game days every Saturday. 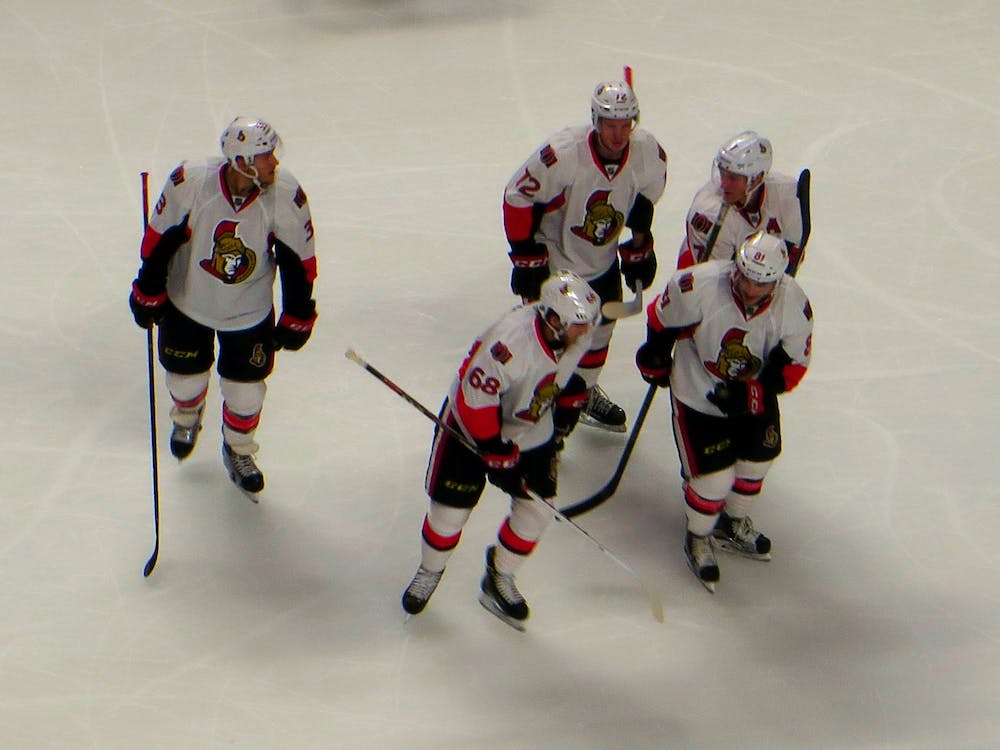