Nine months after its draft recommendations were released, the Task Force on Student Mental Health and Well-being published its final report on Thursday detailing specific ways that the University can improve mental health on campus. The Task Force was composed of students, faculty and staff from all nine divisions.

The report recommends that the University promote a climate of support, increase student access to mental health services and provide mental health awareness training to students, faculty and staff.

In addition to its recommendations, the report includes information about University mental health services as well as data from the 2016 Enrolled Student Survey. Out of the 16,014 students who received a survey, 14.1 percent responded.

The data compares mental health at Hopkins with that of peer institutions. Fifty-eight percent of students reported feeling overwhelmed “often or very often.” A majority of students indicated that at least occasionally, they were so overwhelmed or depressed that it was “difficult to function.” Nearly 30 percent of undergraduates and over 15 percent of graduate students said they had seriously considered suicide.

The report’s recommendations will be implemented by the JHU Mental Health Committee which is currently being formed. The group will include both students and administrators.

Chair of the Department of Mental Health at the Bloomberg School of Public Health Dani Fallin served as one of the co-chairs of the Task Force. She described the process that led to the final report.

“Before we could make any particular recommendations, we needed to really understand the landscape and the challenges about what works and what doesn’t work at Hopkins,” she said.

Students, like senior Alizay Jalisi, appreciate that the University is taking action but are discouraged by the findings of the report.

“It was disappointing but unsurprising to have to confirm what I already suspected about the mental health of the students on this campus,” she said.

“Marginalized groups such as queer students, black students and other students of color are more likely to feel depressed or be so overwhelmed or anxious to the point that they find it difficult to function.”

After it was first convened by University President Ronald J. Daniels in March 2016, the Task Force gathered information via the survey and by looking at mental health practices of other universities as well as academic literature on student mental health.

Fallin elaborated on how the Task Force created its three primary recommendations. The first involves changing the environment at Hopkins to be more supportive of students with mental health issues. According to Fallin, the University can create such an environment by launching communication strategies to change the perception of mental health on campus.

Torres noted that the Counseling Center has already started to implement some of the recommendations.

“We have increased our psychiatry services as a result of the initial discussions of the task force,” he said. “We also increased our hours, so we’re open till 6 p.m. four days a week now... we have also changed our policy such that our psychiatrist can prescribe ADHD medication to students without them being in counseling.”

The third recommendation, which calls for mental health awareness training for all staff, faculty and students, arose from a lack of faculty awareness about University mental health services, according to Fallin.

“If a student is experiencing challenges, even the best intentioned faculty member just may not have all the information at hand to help them quickly,” she said.

Torres noted that the Counseling Center is involved with developing and administering these trainings.

“Over the last year we have really worked to increase the training that we provide or offer to the faculty and staff... as well as providing it to student groups like residential advisors (RAs),” he said.

Student Government Association (SGA) Executive Vice President AJ Tsang, a member of the Task Force, explained the revision process for the draft recommendations. During the summer of 2017, students, faculty and staff submitted feedback via an online form.

“About 50 percent of [the feedback] was factual stuff that they wanted to have corrected,” Tsang said. “The other half was specific to changing the recommendations — making sure that the language was more inclusive and making sure that there were parts of the population that were accounted for that hadn’t been initially.”

Tsang said that students were glad that the University was finally addressing mental health, but some were frustrated that the issue had never been addressed to this extent prior to the Task Force. Tsang noted that the Task Force was originally formed after former SGA Executive President Jason Plush resigned in October 2015 due to mental health struggles.

“It’s tough because mental health is such a deep-rooted issue on campus, and addressing it in any way takes a lot of time and effort to make sure it’s done really well in the long term,” Tsang said.

He also discussed possible challenges in implementing the recommendations, such as ensuring that they are able to encompass all nine University schools.

“The biggest challenge we can overcome when implementing the recommendations is making sure that there is still coordination between different members of the JHU community,” he said. “One of the first recommendations is to create a mental health standing committee... that way at every single campus, and centrally across the University, there’s an entity for holding the University accountable.”

Fallin elaborated on the difficulties of accommodating all of the University’s divisions.

“The University is such a broad swath of folks,” she said. “Getting student and faculty and staff stakeholders from each of those divisions talking to each other... that was a challenge.”

Torres agreed with Tsang and Fallin that collaboration would be difficult. He also addressed further difficulties, such as a lack of resources available to the Counseling Center.

“We’re about 14 to 15 percent above last year in the number of students coming in to see us, and that with the additional services is really a pinch on our resources,” he said. “The University is supportive in that way, but we’re very busy. It’s hard to add things when you’re very busy.”

“It didn’t surprise me that they want more immediate help, walk in services, et cetera, but it surprises me that so many students wanted longer term help,” he said. “If you combine those two together, that’s a big burden on resources.”

Students like Jalisi do not think that a lack of resources is a valid excuse for poor mental health services.

“We have fucktons of money, we have a lot of private donors, our president takes home one of the biggest salaries of university presidents in this country,” she said. “Saying that we don’t have the resources, that’s just infuriating as a student who pays their tuition in full every single semester... We deserve better.”

Junior Marcia Zimmerman, a member of the mental health advocacy organization YesPlus, discussed other issues she found with the recommendations. She specifically focused on how students characterized the University’s culture as “toxic” in the survey’s open comments section.

“What needs to be investigated more is exactly the cause of the toxic culture. Because I think that the Mental Health Task Force is coming at it from a defensive, ‘post-having a mental health crisis on this campus’ angle,” she said. “What kinds of factors are making it more toxic? How are people really affected by this?”

Despite these criticisms, students are hopeful that the recommendations will be successful in improving mental health on campus. Zimmerman thinks required mental health training for faculty is a good idea and suggested that professors could change their exam schedules to reduce stress.

“If the midterm period was just cut by two weeks or if faculty who work in the same department or major could just talk to each other that would be really helpful,” she said. “They just need to realize what kind of life and schedule they’re putting students under.”

Jalisi believes that training should be not only recommended, but also required for Hopkins community members.

“It should be required for every single employee, staff and student to have this training,” she said. “There are a lot of students and faculty, especially unfortunately in the science departments, that I’ve encountered that are extremely unaware and not understanding of how mental health can affect a student’s progress.”

Both Jalisi and Zimmerman feel that increased visibility is important for creating a climate of support around mental health. Jalisi suggested stickers that could be placed in professors’ offices denoting that they have received mental health awareness training.

Many students, staff and faculty believe that collaboration among students at Homewood and throughout all divisions of the University is necessary to improve mental health. Torres pointed out that the Counseling Center in particular could work with other Hopkins community members to implement the recommendations.

“I encourage students to really be thinking about their own mindset, ways in which they contribute to the stress,” Torres said. “We are so busy clinically that we wouldn’t be able to provide all these things from the Task Force. But the idea is in collaboration with other offices we should be able to.”

Jalisi also noted the important role students play in creating a culture of support on campus.

“A lot of the advocacy and awareness student groups... are geared towards promoting safe spaces and, in general, just a non-judgemental environment where people can talk about the ways in which they have felt disempowered,” she said.

“It’s so important, especially since mental health is such a long term issue on the Hopkins campus, to make sure students keep it at the forefront of our advocacy,” he said. 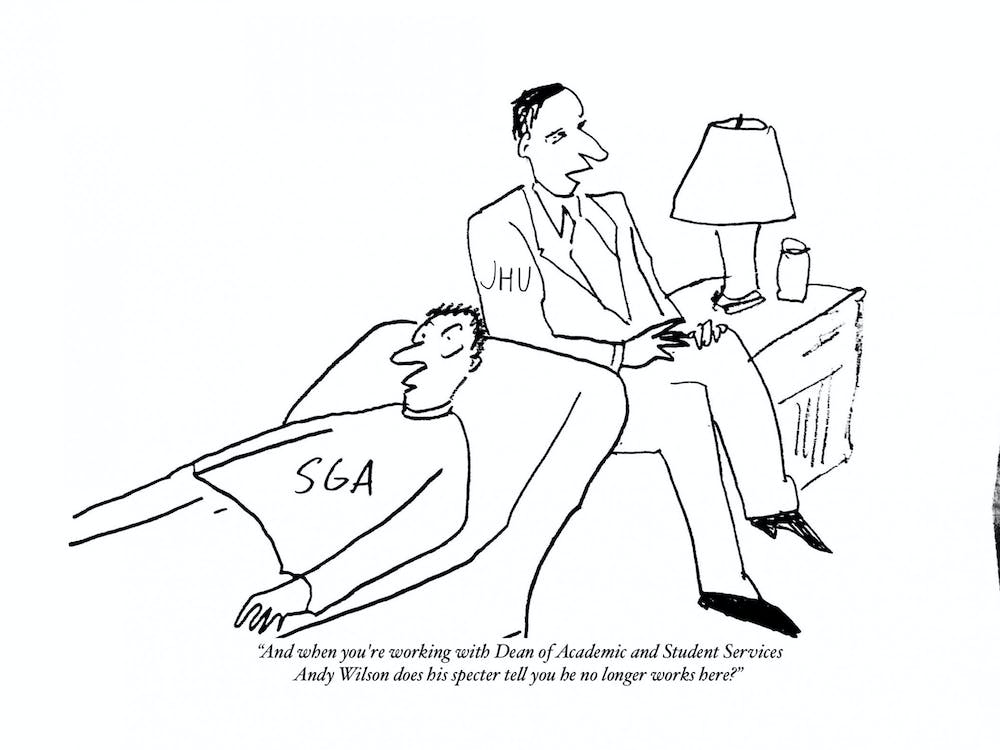