Some members of Captain Shmule play outside in September 2019.

The month is April. The year is 2020. Overwhelmed by my newfound abundance of free time, I forced my left hand into a contorted grip on a borrowed guitar. Lacking the confidence that my fingers were placed on the correct strings, I performed a hesitant strum.

The intended G chord rang out clearly. I hung up the instrument proudly; I had learned four different chords, and it was only April.

Alas, that effort would prove to be the upper bound of my musical training throughout quarantine. For the musically inclined, however, quarantine has been an opportunity to perfect one’s craft: to get experimental, work on passion projects or even learn another instrument or two.

While I was fiddling around with the most basic chords, local band Captain Shmule set slightly more ambitious goals. The band, composed of sophomore Mahesh Pitchayan and seniors Nate Martinez, Justin Sech, Justin Greene and Nathan Kaleida, set out to write, record and release their very own debut album. I’ve had the pleasure of knowing the extremely talented members of Captain Shmule since freshman year and have heard them play on multiple occasions.

So the prospect of listening to my friends’ very own debut album thrilled me. I invited myself over to a jam session determined to hear their novel work firsthand. With four of the band members and myself masked and distanced (Kaleida could not make it, allowing me to attend in accordance with school guidelines), it felt refreshing to hear live music again.

Martinez explained that the album, which he began writing during quarantine, is a culmination of four years of playing at the University with extremely gifted individuals.

“We wanted to create a lasting body of work,” he said.

Joined by lead guitarist Sech, Pitchayan on bass, Greene on rhythm guitar and Kaleida on keys, Captain Shmule is well-equipped not only to write and perform together, but also to improvise and play off of one another. Their ability to improvise riffs is an impressive display of musical proficiency.

“It would feel like a waste not to write anything,” Martinez said.

I couldn’t help but agree.

I found myself in their studio, otherwise known as Martinez’s room. Prioritized as a space to practice together, his bed was hidden behind a curtain inside a small closet to maximize floor space. Their makeshift studio boasts a full set of drums, a keyboard and a colorful array of tapestries, blankets, towels and flags hung across the ceiling and draped over windows to soundproof and decorate.

With both boxes checked, the band members concluded tuning their instruments and had ample time to chat before getting to work. With a few clicks of Martinez’s drumsticks, Captain Shmule dove into their warm-up song: “Joe Frazier” by Orions Belte.

From the first note it is evident that the synergy between band members is next level, the payoff of playing together for years. Martinez and Sech, freshman-year roommates, hit their musical stride as sophomores after tracking down a set of drums and playing out of a tiny room in the Mattin Center. Sech recalled that they improved most by simply playing together, performing the first gigs in basements and other venues around campus.

The name Captain Shmule has more mysterious origins. Members of the band couldn’t necessarily speak to his defined significance, but rather his status as an entity. I decided not to pursue the question further as they prepped to play their first original song of the session.

Currently untitled, their first original song started slowly with a deep, groovy bassline and built as instruments joined in turn. With lighter bridges sewn between heavy jams, Captain Shmule expertly raised the volume of each instrument such that none was individually drowned out: what Greene referred to as an effort to perfect their dynamics by making certain parts quieter than others.

One aspect of Captain Shmule’s style that deserves recognition is their inclination to play — and write — longer songs.

“An epic. That’s what we’ve been calling them,” Sech claimed between laughs.

Longer songs are more riffable, the band agreed. More jam-oriented. The music can build, ebb and flow. Music seems to be more profound when the listener is taken for a ride instead of a quick walk through the park. The fact that Captain Shmule not only refuses to shy away from longer songs, but even prefers them, speaks more to the quality of their music than anything else.

“How would you describe your own style?” I asked.

“Our style has been described as ‘cowboy-surf,’” Martinez said with a wide grin. “But I’d say we’re more... progressive folk. No, wait...”

As someone who finds my musical thrill constructing playlists rather than wielding an instrument, I also had a hard time pinning down their style. Some sounds were reminiscent of a psychedelic, surfy rock while other times folky tunes tended to dominate.

“We tend to default to heavy blues,” Sech added.

Drawing inspiration from the likes of King Gizzard & the Lizard Wizard, The Mattson 2, pentatonic blues and the grungy garage scene, Captain Shmule pulls inspiration from a wide range of sources. Everybody in the band has their own background and influences. Everything they’ve listened to and practiced has become the culmination of their talent. They all agreed that they’re just starting to figure out how they’re sounding.

Their second original of the night, “About the Beach 1,” had tunes reminiscent of rich 1960s psychedelic rock.

Martinez recalled that he first started writing songs at the onset of the pandemic. Looking for aspects of music that he liked and finding things that stuck more than others became the start to their full-length debut album.

Their songwriting process is simple: After a band member proposes their own original piece, everybody else writes their own supporting part. From there, they practice and develop the song until it is more structured and tuned up. A constantly updated spreadsheet lists their stock of unfinished songs, which the band is completing a handful at a time.

When asked what’s next for Captain Shmule, they reported that another parallel album is in the works. In the meantime, they are brushing up the final songs for their first album. Even though the Hopkins careers of most band members are coming to a close, Captain Shmule sees this as the beginning.

“We have all the pieces,” Sech said, “but we definitely have a lot of learning to do.”

This goes to show that whether you’re a musical savant or a naïve beginner, there is always room to learn and improve. I didn’t miss the opportunity to show them that I had done some learning of my own and played a confident G chord in front of the group.

Maybe I’ll have more time next quarantine to learn a couple of extra chords. But in the meantime, I’ll be looking forward to their album’s release, projected to be sometime in May, and waiting for the tambourine position to open up. 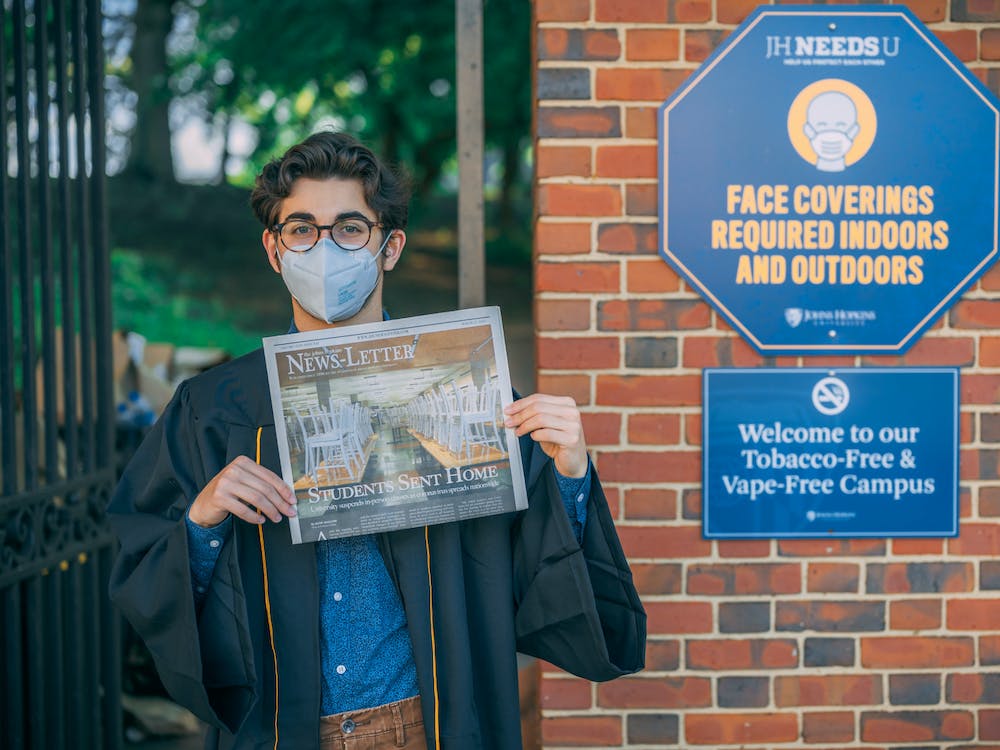 A letter to my freshman self, plus cicadas