Tie considers the impact of growing tension between the U.S.and China on the Hopkins community.

I have been an international student for the past eight years, but I may not be one anymore. I had believed America to be a wonderland of dreams, equality and tolerance for all.

I certainly don’t believe it any more. The Trump administration’s recent proclamation aims to revoke the visas of a significant number of Chinese graduate students who are suspected of having military ties. Three weeks later, the University shrugged the issue off with an insincere, belated email.

The email summarizes what the presidential proclamation means, recalls University President Ronald J. Daniels’ statement back in July 2019 and reiterates the University’s commitment to closely monitoring the situation and supporting international students and scholars. This is not enough in a time when U.S.-China tension tightens by the day.

In recent years, trade war and visa restrictions have been thrown back and forth. On May 29, the White House issued a proclamation which limits visas for graduate-level and above students who are “associated with entities in China that implement or support China’s Military-Civil Fusion (MCF) strategy,” shocking every international student in the U.S.

Student visa records show that in 2018 as many as 368,073 Chinese students studied at American universities, of whom Hopkins welcomed approximately 2,991.

I asked some friends who are international students about how the U.S.-China tension was affecting them personally. I received numerous anonymous submissions containing stories of aborted dreams.

One visited home during Christmas break of 2019. As of June 2020, they are still unable to return to the U.S.

One had his offer to a postdoc position rescinded by the employer, who waited for the visa to be approved for over four months before hiring someone else available.

One planned to get married to his long-distance girlfriend in China but is still unable to secure a flight ticket.

Many have to reconsider their future plans as visas are suspended, as internships offers are rescinded and, most importantly, as a future in America seems bleaker than ever.

I am not yet personally affected by the May 29 proclamation, as it targets mainly Chinese graduate students who have undergraduate degrees from Chinese institutions. However, I fear that this overt gesture of hostility sends signals to employers and institutions of higher education, which makes being Chinese in America harder than it already is.

More importantly, I fear this proclamation is only the beginning of the Trump administration’s attacks on China and Chinese students in a desperate measure to portray a common enemy and unite a fractured nation.

When international students struggle with the uncertainty of the future, increasingly stringent visa controls will also hurt American higher education institutions and corporations, which anticipate great financial loss from the coronavirus pandemic. The Hopkins administration announced that if unmitigated, the losses from all tuition and student-related revenue sources could be as much as $25 million for FY20 and $150 million for FY21. Considering that international students usually pay tuition in full, stricter visa controls will only worsen the University’s revenue loss.

Financial motives aside, international students also make up a great proportion of research and ongoing projects at Hopkins. U.S. President Donald Trump has suspended H-1B visas, which authorize more than 85,000 skilled workers and researchers to work in the U.S. each year. Similarly, other Republican lawmakers have pushed to suspend the decade-long program Optional Practical Training, which has allowed international students to extend a post-graduation one-year stay in the U.S. if employed in a field related to their area of study. When many international students cannot stay and work for Hopkins research and projects, it may take a toll on the University’s academic progress.

Either out of financial considerations or out of insistence on academic exploration, Hopkins should do more to protect the status of international students, most of whom, like me, prefer lab reports to political drama.

Many universities, including Northwestern, Cornell, Northeastern and University of California, San Diego have issued statements voicing their support for international students from China, as most higher education institutions aim to create a diverse, inclusive environment for all.

Unfortunately, Hopkins has never been proactive in standing up for anyone except the top administrators, calling to arrest student Sit-In protesters in May 2019 amid private police controversy, laying off food service workers without assistance during a pandemic and suspending contributions to the employees’ 403(b) retirement plans just one month after the close of campus.

With the entire nation embroiled in rage and grief over the murder of George Floyd, Hopkins issued a late and insincere statement, prompted backlash from the student body. Only after widespread criticism did University leaders issue a statement on June 12 suspending the implementation of the Johns Hopkins Police Department for two years, an action more performative and ameliorative than sincere or determined to help those who have suffered previously because of the poor judgement and selfishness of those in power.

In a similarly belated and insincere manner, the Office of International Services (OIS) sent an announcement to international students and scholars on June 19, three weeks after the presidential proclamation and about four months after racism against Asians became more overt in America.

As the email reads: “The JHU Federal Strategy office, in coordination with OIS, works diligently to represent the university’s strong interest in maintaining robust global mobility... directly with decision-makers in Washington, D.C.”

It would be convincing and appreciated, if the administration had shown any compassion for students or faculty in the past at all. Even though “working with the decision-makers in Washington, D.C.” sounds assuring at first, it is no more than a grand yet hollow promise, not unlike the address to “stand in solidarity with the black community” from Hopkins administrators previously.

Frankly, it horrifies me that Hopkins repeatedly shows that underneath the intelligent academia built by renowned professors, curious students and diligent researchers (many of whom are Chinese students with visas) is an ultimately white institution where administrators make decisions only to protect and benefit themselves.

Hopkins administrators should assume more social responsibility, whether it’s ensuring the welfare of its staff and faculty, reconsidering the decision to have a private police force in a time of widespread rage against police brutality or speaking out on behalf of the international students who contribute academically and financially to the University tremendously. Unfortunately, so far in a time of great crisis, they have not shown great responsibility.

We need no more words of “inclusion and diversity” or “enduring commitment.” We need to see actions, and we need to see them now.

Opposing Viewpoints: Hopkins handled the pandemic as well as it could

By WILL EDMONDS | 1 hours ago

Opposing Viewpoints: Hopkins should have been more transparent during the pandemic

By SOPHIA PARK | 1 hours ago 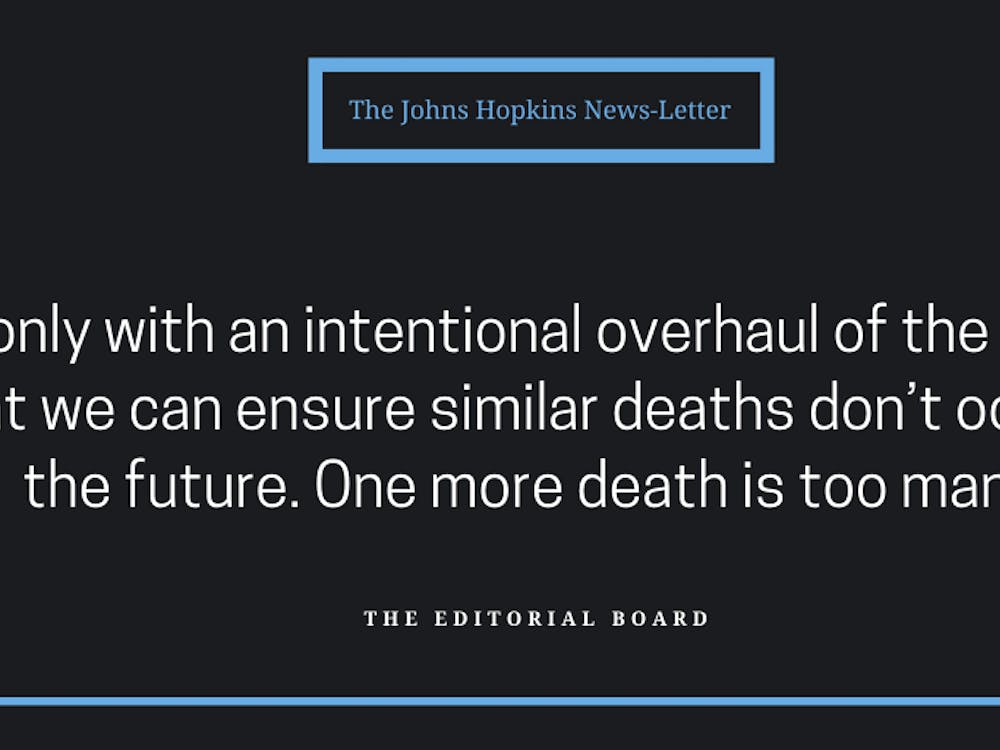 Another Black man was killed by police. Meaningful reform is long overdue.

By THE EDITORIAL BOARD | 2 days ago
Comments powered by Disqus