TEDxJHU held their fall salon, “Message in a Bottle,” on Nov. 21. The event showcased three Hopkins undergraduate speakers as they shared their personal experiences as students at Hopkins.

TEDxJHU Communications Director Merry Qian began the salon by explaining what the significance of the theme “Message in a Bottle” was to her.

“In our day-to-day interactions, we really don’t know who our message will reach, no matter how big or small the message is,” Qian said. “What message would you send out there in the world if you had the choice?”

The first student speaker of the night was sophomore Jimmy Pitingolo, who spoke about finding his place in Hopkins Greek life as a gay man.

Initially, Pitingolo stated, some of the fraternity brothers he spoke to said problematic things, which made him question whether he would be accepted into fraternity life. Pitingolo explained that he eventually found other fraternity members who made him want to be a part of that community.

He said he worried that walking away from Greek life would further perpetuate the problematic attitudes that were pushing him away.

“I refused to reinforce the idea that you can’t be in a frat if you’re gay,” Pitingolo said.

Pitingolo recalled the night he came out to his pledge class.

He said that he made the decision because it felt important to him to do what he could to break the stereotype that gay men cannot be in fraternities.

However, Pitingolo explained he does not believe his experience was necessarily representative and that he still sees many areas where work needs to be done.

The second speaker of the night was Junior Katemanee Burapachaisri, who spoke about how she reclaimed her autonomy after an emotionally-abusive high school relationship and began helping others who had similar experiences.

She explained how her relationship had left her feeling isolated from her friends and insecure about herself.

What pushed her to leave the relationship, she said, was when he began physically abusing her.

The hurt she carried from this relationship was still weighing heavily on her when she arrived at Hopkins, Burapachaisri explained.

Then one day Burapachaisri met a girl who reported experiencing many of the same things that she herself had.

Burapachaisri explained that this led her to join A Place to Talk, the Hopkins-community peer-listening organization, as well as to begin working with the One Love Foundation, an organization dedicated to the prevention of intimate partner violence.

“I hope that my story emphasizes… the serious need for raw and honest conversation about how we treat each other,” she said. “Becoming aware of the signs of abuse, particularly the nuances of emotional abuse and being mindful of our interactions with other people can help build a stronger community in ending this violence.”

The third speaker of the evening was senior Awoenam Mauna-Woanya, who discussed how his passion for civil engineering and for community empowerment go hand-in-hand.

Mauna-Woanya pointed to so-called hostile architecture, or features of public spaces that are designed to make them unusable for certain populations, such as the homeless or drug users, as what he was reacting against.

Mauna-Woanya said that during a summer with the Hopkins Community Impact Internships Program, he learned how to engage with some of the communities in Baltimore and how to ask them what they really needed.

Another thing which Mauna-Woanya said he learned is the necessity of giving yourself space to be creative. Set goals for yourself, he argued, but do not restrict yourself to only one way of achieving them.

In an interview with The News-Letter following the event, Junior Lina Choi said that she thought the light that the event shed on topics that are less often discussed was very important.

“The event was really inspiring. It talked about a lot of things that are normally kept silent on campus or something that is not often talked about, and it’s really important that we voice these topics out loud,” she said.

“It’s really incredible to have the ability to let people share their stories. And these were three very different stories that were very unique and something you don’t hear every day. It’s important that we let people share that,” he said.

Graduate students call for University to protect their rights as workers 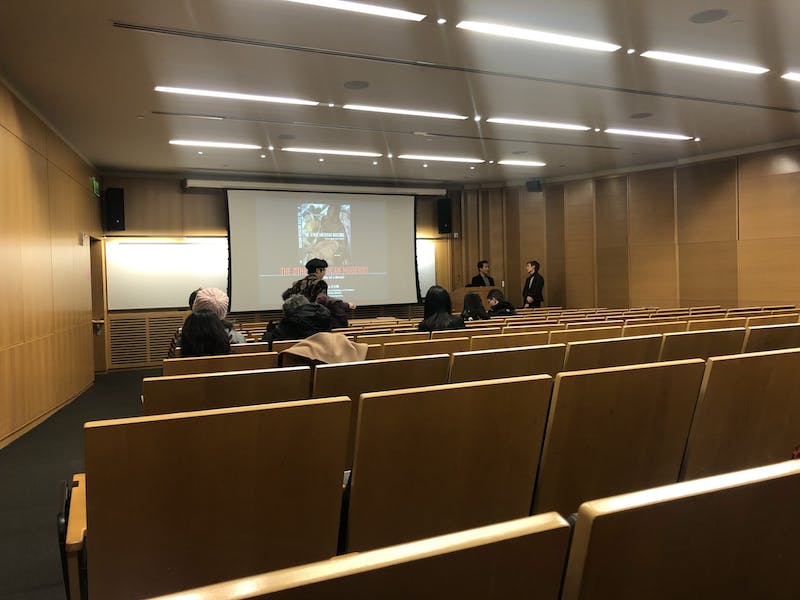 Opposing Viewpoints: There are benefits to SGA's club policy updates

THE PUBLIC EDITOR: Who appeared in The News-Letter this fall?

Using a semester in Paris to fall in love with myself

Hopkins must support feminist and queer scholarship. Ending the WGS Teaching Fellowships is not the solution.