LANCE CHEUNG FOR THE USDA VIA FLICKR CC-BY-2.0 The Baltimore Farmers’ Marlet & Bazaar offers a wide variety of goods.

When you wake up at 11:30 a.m. on Saturday, frantically pull on clothes and speed walk to the 32nd Street Farmers Market (formerly the Waverly Farmers Market) you know you might have a farmers market addiction.

I was on a mission to the Uptown Bakers stall, hoping to arrive before they sell out of my favorite pastry, the absolutely decadent sticky bun.

Despite my heroic arm-pumping speed walk, I arrived too late: They had sold out. I settled with buying some apples from Reid Orchards, a 32nd Street Farmers Market staple that sells a vast variety of fruit.

As I glumly walked home with three pounds of heirloom apples and a loaf of bread but no sticky bun, I resolved to wake up earlier next week and make it on time.

Then I realized that next week is Thanksgiving break, and I won’t be in Baltimore for the next two Saturdays! There has to be another way to get my sticky bun fix.

Luckily for me and the other sticky bun fanatics of the world, there is another way. In addition to visiting the 32nd Street Market, Uptown Bakers also operates a stall at the Baltimore Farmers Market & Bazaar on Saratoga Street.

For those of us who sleep through the majority of the Saturday morning markets at 32nd Street, the market on Saratoga is open on Sunday mornings from 7 a.m. to noon.

Continuing my mission, I woke up early on Sunday and boarded the Charm City Circulator at 10:30 a.m. The Baltimore Farmers Market & Bazaar is located under and shaded by the Jones Falls Expressway overpass at the conjunction of Holliday and Saratoga Streets and is directly on the purple route.

It is the biggest producers-only market in Maryland and has a good balance of craft, prepared food and vegetables. Although some vendors (like the bakery I was searching for) are common, between this and the 32nd Street Market, there are more than enough unique vendors to make a trip downtown worthwhile.

About twice the size, its style is also markedly different, with a greater focus on prepared foods and crafts than farm fruits and vegetables.

The bazaar portion of the represents a large number of vendors selling crafts like jewelry and ceramics. It is a category absent from the 32nd Street market and is not really my cup of tea but may appeal to some folks.

The inclusion of crafts is not at the expense fruit and vegetable options, since there is plenty of space to accommodate more farmers at this market than at 32nd Street, and options abound even in November.

Apples, squash and greens are the obvious suspects at this time of year, but I was pleasantly surprised to see the rear guard of the raspberry crop still available.

After orienting myself, I found the Uptown Bakers stall. I had arrived in time and there were exactly three sticky buns remaining. The sticky bun was every bit as good as I remembered, packed with walnuts and a sweet, butterscotch taste that only huge amounts of butter and sugar bring.

It’s the kind of pastry that makes you want to write an apology to your arteries to put in a time capsule to open 30 years from now.

To absolve myself of this guilt, I bought some lettuce and promised myself I’d make some salad this week. Pro tip: Some farmers are willing to sell lettuce at a discount close to the end of Sunday market because they can’t store it until next week.

Because the JHMI shuttle does not run on Sunday mornings, the purple route of the Circulator is the best way to get here, but if you’re like me and can’t find the stop for the northbound circulator, it is a pleasant walk through Mount Vernon to Penn Station, where the location of the stop is more obvious. 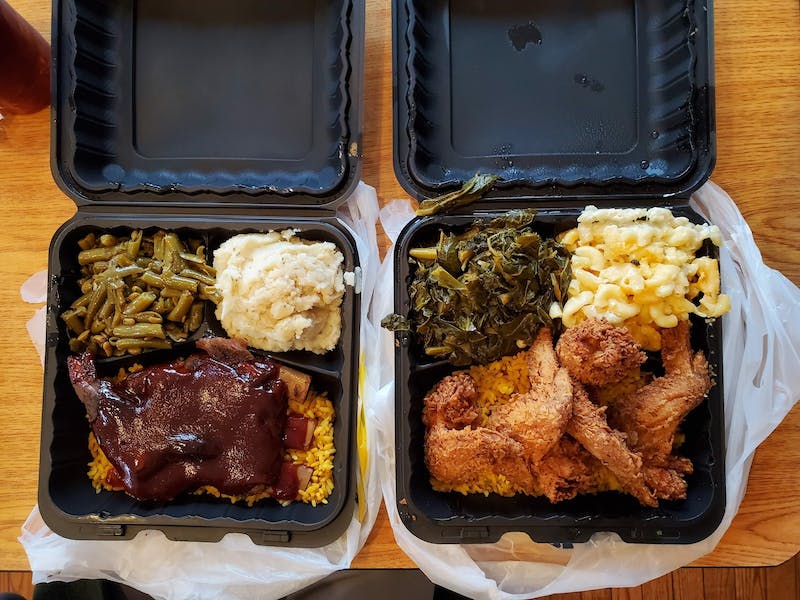