gage Skidmore/cc-by-sa-2.0 John Boyega and Daisy Ridley are the new stars of the Star Wars franchise, headlining The Force Awakens.

Gazing upon what it had wrought, the series recoiled in disgust, attempting to purge the image of Jar Jar Binks from its mind. But it was not enough. Realizing its weakness, the series sought out a new master to guide it back to the light. Thus began the redemption of Star Wars.

Star Wars is arguably the most prominent franchise to come out of film in the last 50 years, with its line of films, toys, games, cutlery, appliances and even toilet paper saturating the markets for decades. With an enterprise so sprawling, it’s no surprise that the mammoth license would attract the attention of the juggernaut Disney corporation.

Following the series’ revitalization at the hands of the Mouse, however, tensions initially ran rather high. Would Disney be able to do the license justice? With Disney’s nearly mechanical film production procedures and memories of the infamous prequel films still fresh in everyone’s heads, even this critic was initially skeptical. However, what director J.J. Abrams gives audiences in Star Wars Episode VII: The Force Awakens is nothing short of a glorious return to form for the beloved series.

The film is set, as with all of its predecessors, a long time ago, yet still remarkably in the future. Thirty years after 1983’s Return of the Jedi, a victorious Rebel Alliance (now once again the Republic), find themselves troubled by the First Order, a remaining faction of the former Empire led by a mysterious Supreme Leader (Andy Serkis).

To make matters worse, Jedi master Luke Skywalker (Mark Hamill) has vanished without a trace after treachery from within crippled his new order of Jedi. On the small desert world of Jakku, pilot Poe Dameron (Oscar Isaac), aided by Stormtrooper-defect Finn (John Boyega), attempt to retrieve and protect a map to the Jedi master’s location.

But they are not alone: Kylo Ren, dark follower of Snoke, wishes to track down Skywalker himself. And there is someone else on hidden among the sand who may be more than they seem.

Fans of the original films will likely see precisely what is meant by a “return to form for the series.” In terms of plot, The Force Awakens mirrors A New Hope in nearly every way. From its characters to its twists to the sequence of events, there really isn’t much new ground broken.

Admittedly the similarity between this film and its predecessors may be a negative to some viewers. To others, however, it may also be precisely what was desired: abandoning the flaws of the prequel trilogy in order to recapture the tone and feel of the originals. In that regard, the film succeeds without question.

This recapturing of the magic of the originals is aided in no small part by the film’s absolutely fantastic cast. Harrison Ford, Peter Mayhew, Carrie Fischer and Mark Hamill all return in their classic roles and feel right at home on screen. Their presence brings just enough nostalgia to the screen to bring a smile to any longtime fan’s face. 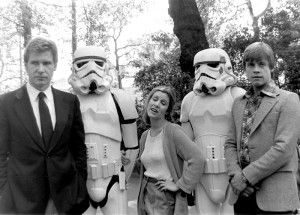 Yet the film does not just rely on that nostalgia. John Boyega and Oscar Isaac bring a wonderful charisma to their roles, owning every scene they are in. Furthermore Daisy Ridley, playing a scavenger named Rey, gives an absolutely beautiful performance, thoroughly defining her character without relying on exposition or explanations (save for a few scenes). Oftentimes she is able to carry a scene or set a tone with just her facial expressions alone, a talent that cannot be understated.

Despite the film’s well-earned praise, however, it still has a fair few flaws that need addressed in its sequel (which, given the film’s gross earnings so far, is of course inevitable).

Its villains, for one, are not quite as memorable as its heroes. In particular, General Hux, played by Domhnall Gleeson, feels relatively weak as a villain as does his criminally underused subordinate Captain Phasma.

Kylo Ren, the film’s primary antagonist played by Adam Driver, is compelling in his own right as a lost, yet hungry villain still coming into his own. What he fails to convey, however, is the powerful, looming sense of terror elicited by characters like Darth Vader, a tone which is very difficult to recapture, but a notably missing staple nonetheless.

It wouldn’t be a Star Wars film without a gorgeous score by musical genius John Williams, who has composed for these films since their infancy. Fortunately for all, he once again delivers, giving us a score that captures the tone of every scene while still having that distinct Star Wars feel, even after all these years.

While admittedly his new themes may not (yet) have the iconic ring of his famed “Imperial March” or the Force theme, time will tell how these pieces fare in years to come.

With this film, it feels as though the Force truly has awakened. Incorporating elements both new and old, Star Wars Episode VII: The Force Awakens reminds us of the magic that made the franchise what it was.

While not necessarily innovative or game-changing, it instead offers an invitation to return to a galaxy far, far away. It tantalizes us with what we already know and love and promises that, this time, it will show us something we actually want to see. And there will be no Gungans to spoil the fun.

By RISHABH KUMAR | 6 days ago

By ANDREW SHIBUYA | 6 days ago

Melissa Lozada-Oliva’s Dreaming of You reimagines the ghost story