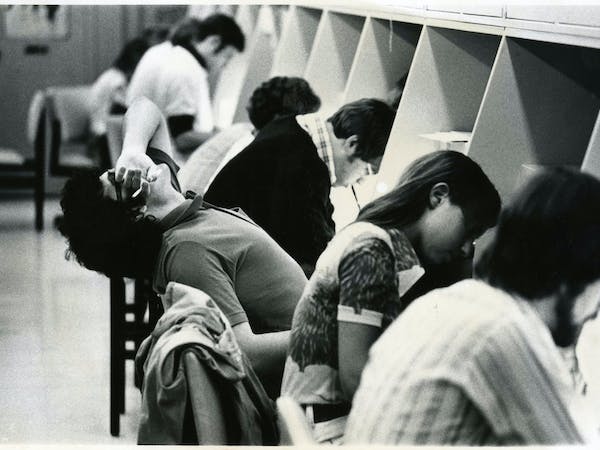 Yuri Zelinksy (better known as “George” by his News-Letter peers) attended Hopkins from 1973 to 1977, graduating with a Bachelor of Arts in Social and Behavioral Sciences. During his time at the University, he worked as a staff writer and News Editor for The News-Letter. Today he works in Washington, D.C. as a lawyer. 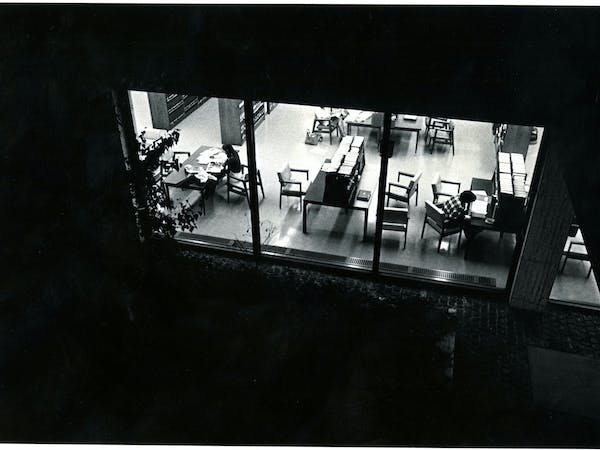 A conversation with Eric Garland, Editor-in-Chief '77

Eric Garland was a writer and editor for The News-Letter during his sophomore year and Editor-in-Chief as a junior. He graduated in 1978 and joined the City Paper startup. He went on to work on a number of magazines, and since 2009 has been a partner in Blue Heron Research Partners, a journalistic-driven due diligence firm for hedge funds and private equity firms. 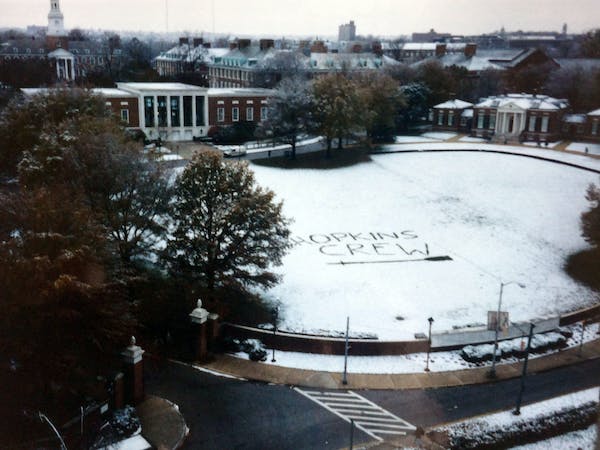 A conversation with Marie Cushing, Editor-in-Chief '10

Marie Cushing attended Hopkins from 2006 to 2010 and worked on The News-Letter as the inaugural Layout Editor, Your News-Letter Editor (now Leisure), News & Features Editor and Editor-in-Chief. After graduating from Hopkins she taught for a decade in Memphis and now serves as a research specialist in education for the University of Virginia. 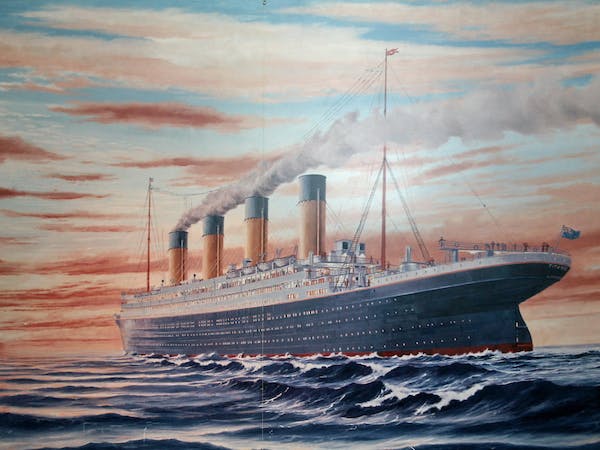 Michael Szeto was part of The News-Letter from 2007 to 2010, during which he was Associate Online Editor. He received a Juris Doctor degree from New York University School of Law and currently serves as university counsel in Stanford University’s Office of the General Counsel. 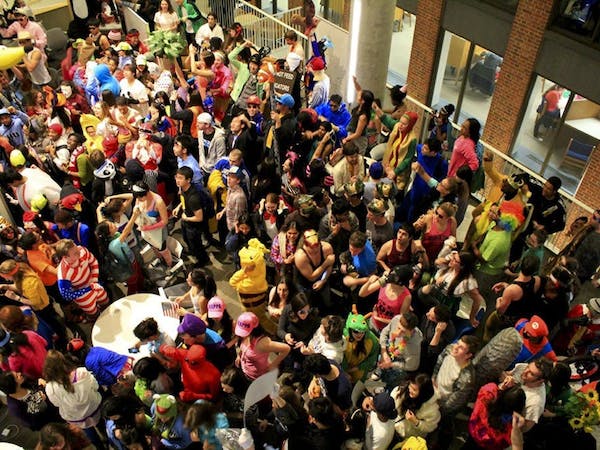 Benjamin Kupferberg graduated from Hopkins in 2015 and from SAIS in 2016. He worked for The News-Letter all four years he was an undergraduate, from 2012-2015. He started by breaking coverage on Professor Steve Hanke’s uncovering of hyperinflation in Iran, which gave The News-Letter national attention. He was then a News Editor and worked alongside Evan Brooker and Nash Jenkins, “some of the finest men to ever grace the Gatehouse.” 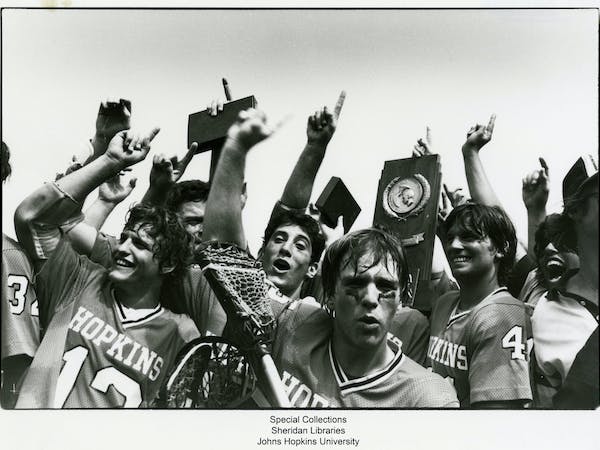 Charles Kruzansky was a Managing Editor, Baltimore sports reporter and a restaurant reviewer for The News-Letter from 1980 to 1982. Kruzansky was very busy with local Maryland and national political campaigns and was a Political Science major. He went on to business school at Columbia University and then went to work for the New York State (NYS) Legislature on their Ways and Means Committee. After five years of learning all about NYS government, he went to work for Cornell University as a lobbyist. 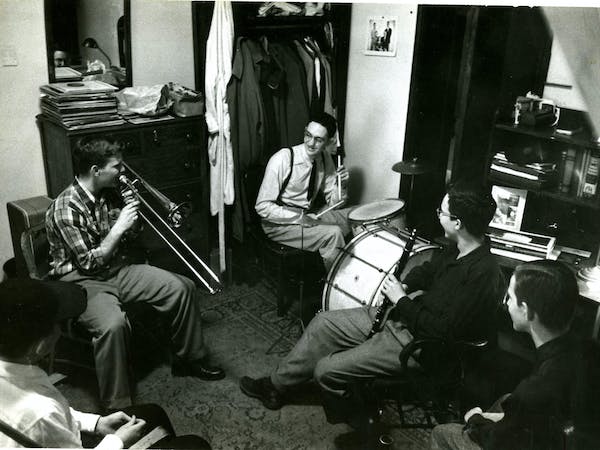 Professor Richard Rose began his education at Hopkins in September 1951 and graduated in June 1953. In his two years as a student, he wrote news stories and features for The News-Letter. He currently lives in England and boasts 4,000 books in his library at home. 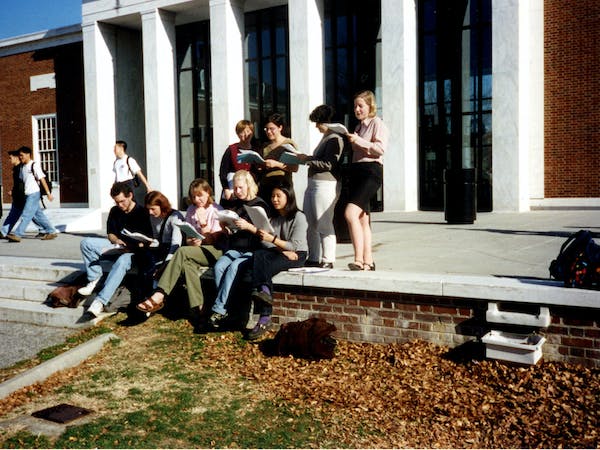 Jessica Valdez attended Hopkins from 2001 to 2005. During her freshman year, she was a writer for The News-Letter. She became a News Editor her sophomore year and was Copy Editor her junior year. After receiving her PhD in English from Hopkins in 2012, she taught in the writing program at New York University Shanghai for one year. She has since been a professor of English literature at the University of Hong Kong for seven years. 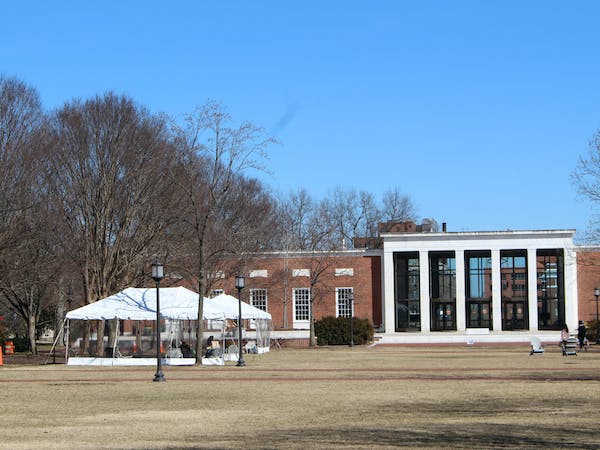 Lena Denis was a staff writer for The News-Letter from 2007 to 2011 and recently returned to Hopkins as the Geospatial Data, GIS and Maps Librarian in Data Services at our own Sheridan Libraries. 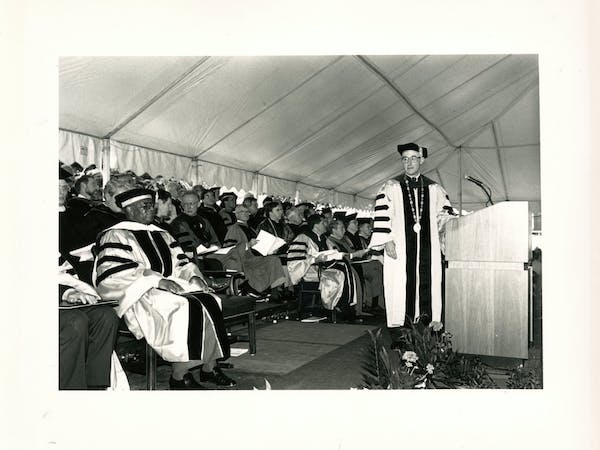 A conversation with Jack Lipkin and Mira Vayda Edelman, Editors-in-Chief '92

Jack Lipkin was a production assistant, Copy Editor, Managing Editor and Editor-in-Chief for The News-Letter from 1989 to 1992. He now works in a communications role at Novartis.

Mira Vayda Edelman was a Copy Editor, Features Editor, News Editor and Editor-in-Chief for The News-Letter from 1989 to 1992. She is now a lawyer at Dish Network in Denver. 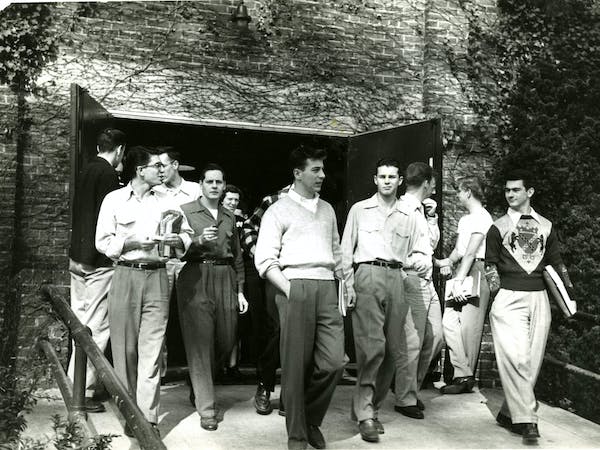 Arthur Cleveland worked on The News-Letter in various roles on the business side of things, including as publisher and business manager from 1958–1962. Since then he has worked at The Philadelphia Inquirer, The New York Post and The Newspaper Advertising Bureau, among other jobs. 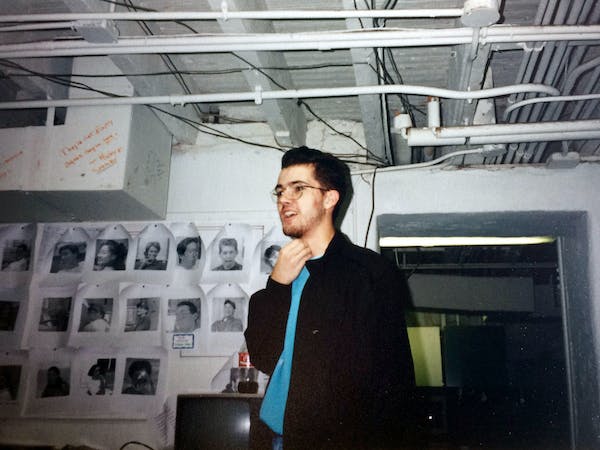 A conversation with Matthew Dujnic, Cartoonist '96

Matthew Dujnic attended Hopkins from 1992 to 1996. He knew on the day he arrived that he wanted to work on campus publications. But news wasn’t his bag, so The News-Letter wouldn’t see him until junior year, when he was roped in as the Editorial Cartoonist. Freshman year, The Black and Blue Jay got him instead — he was a writer and editor (and cartoonist) there for all of his four years. He became somewhat renowned for his weekly comic strip in The News-Letter, jhu.edu. 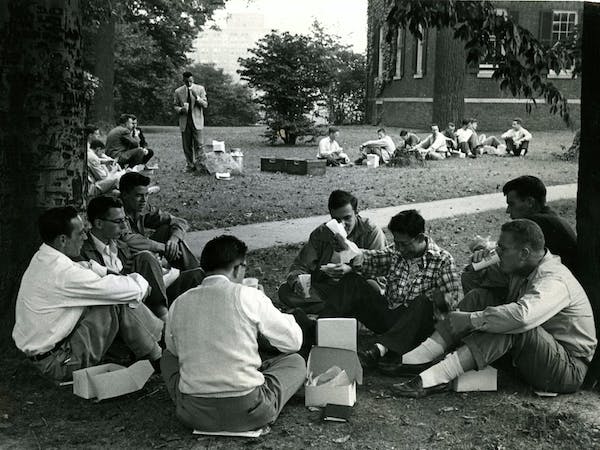 A conversation with John Griffith, Editor-in-Chief '54

John Griffith was a News Editor 1952-53 and one of the Editors-in-Chief 1953-54. He is a professor emeritus in the Department of Health Management and Policy at the University of Michigan’s School of Public Health. 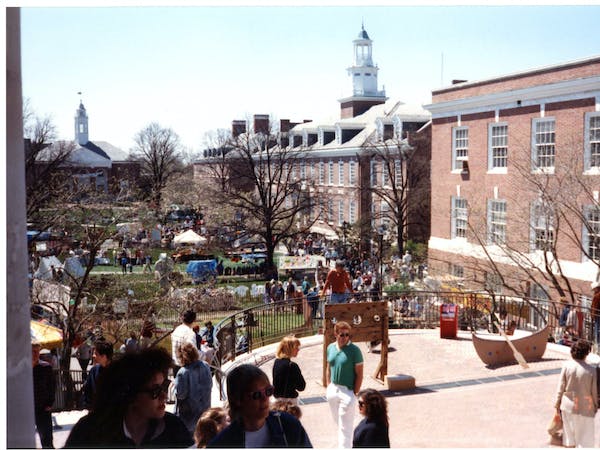 Nicole Winfield was a news reporter for The News-Letter from 1991 to 1992. She is now an Associated Press foreign correspondent based in Rome covering the Vatican in Italy. 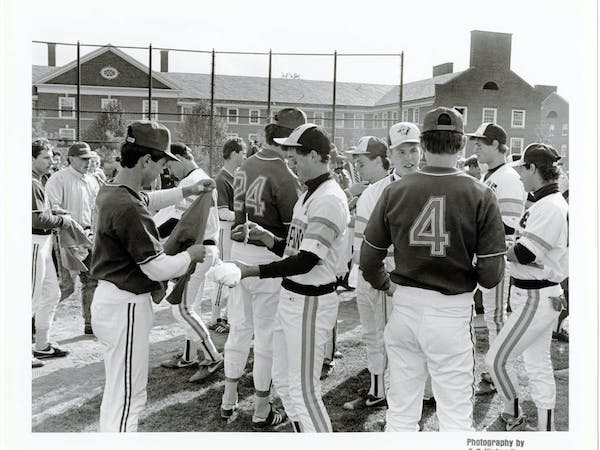 Rachel McGuckian attended Hopkins from 1986 to 1990 and was a four-year varsity letter winner in field hockey, and an All-University Athletic Association selection and co-captain her senior year. There was a dearth of writers interested in reporting on women’s sports in the 1980s, and during her freshman year she occasionally wrote articles for The News-Letter at the request of either staff, coaches or the athletic department. She was invited to become a regular staff writer her sophomore year, and was named Co-Sports Editor (along with Josh Orenstein) her senior year. She was one of the first female Sports Editors in Hopkins history. 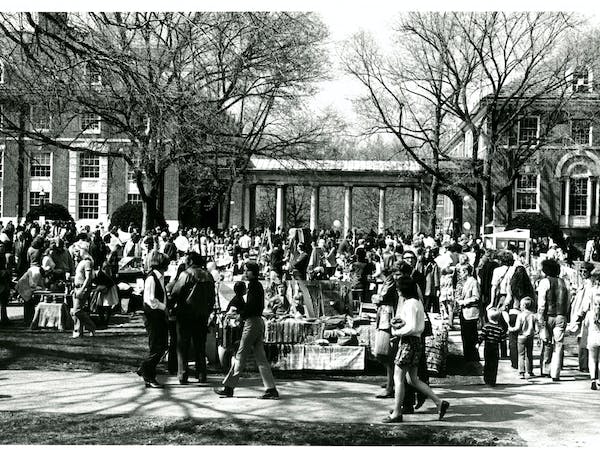 A conversation with Richard Waring, Editor-in-Chief '74

Known as “Mr. News-Letter” on campus, Richard Waring was a valued member of the paper throughout his Hopkins career, from 1970 to 1974. He rose through the ranks, occupying positions of staff reporter, Managing Editor and Executive Editor. During his senior year, he was the sole Editor-in-Chief of the paper. After graduating, he worked as a reporter for two newspapers in Massachusetts and then attended law school. He continued to work in private law practice until 1986, which is when he joined the Massachusetts Board of Registration in Medicine. Since 2000, he has worked as an attorney for the National Association of Government Employees, a union that represents Massachusetts state employees. 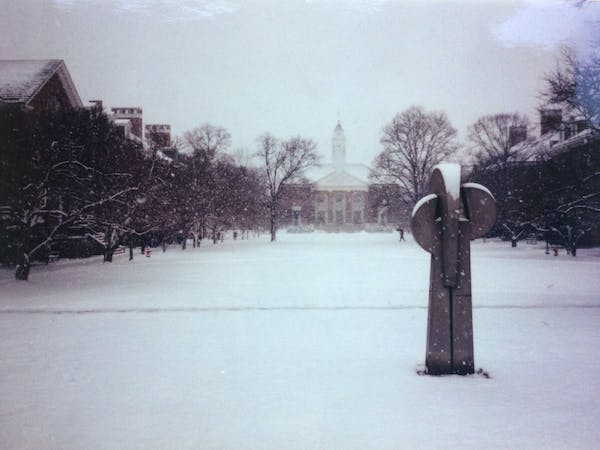 Joff Masukawa wrote for The News-Letter during his time at SAIS, from 1985 to 1987. Now he is an independent commercialization strategist who assists small, rare and speciality drug companies develop their business strategies as president and founder of Diligentia Strategy. 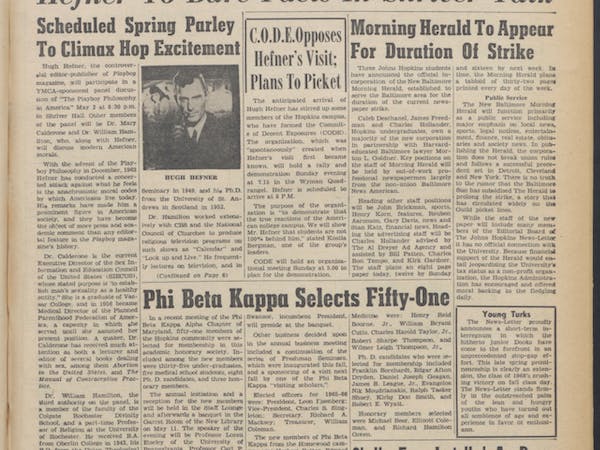 A conversation with Caleb Deschanel and Jim Freedman, Editors-in-Chief '66

Caleb Deschanel was a Managing Editor from 1964-65 and an Editor-in-Chief 1965-66. He is a cinematographer and film director who has been nominated for six Academy Awards.

Jim Freedman was a Features Editor 1964-65 and an Editor-in-Chief 1965-66. He is a professor, author and founder of an international consulting firm. 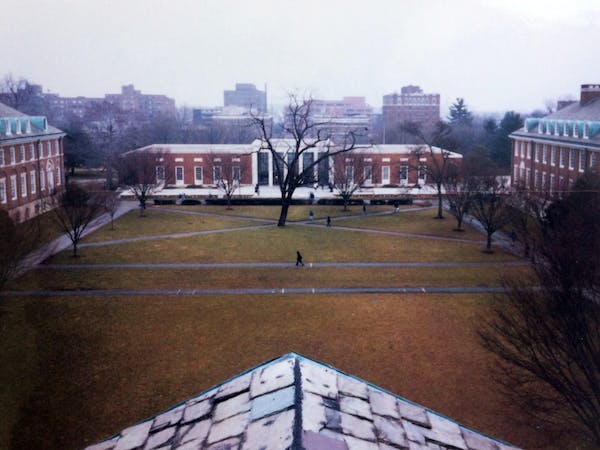 Miriam E. Tucker began writing for The News-Letter in her junior year during the fall of 1984, and served as Co-Science Editor from 1985 to 1986. She focused on stories about medical research, often taking the Hopkins shuttle to the School of Medicine and interviewing doctors about their research. That background led her to a writing job with the International Medical News Group LLC in Rockville, Md., where she worked until 2012. She now freelances for several different media outlets, including the Washington Post, National Public Radio’s Shots blog and WebMD’s professional site Medscape. She writes extensively about diabetes, a condition she has lived with since 1973. 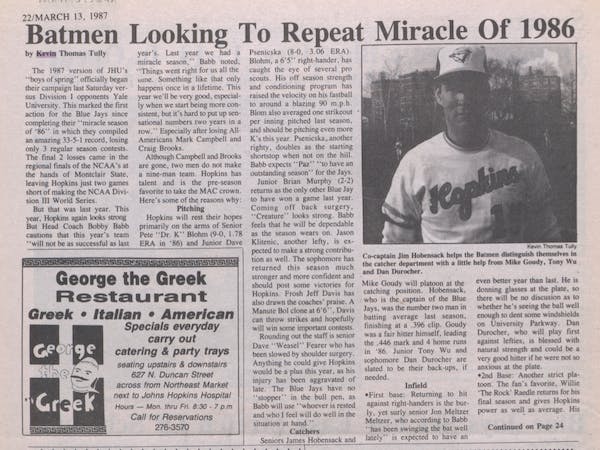 A conversation with Kevin Thomas Tully, Staff Writer and Photographer '87

First setting foot in the Gatehouse darkroom in 1985, Kevin Thomas Tully joined The News-Letter as a Staff Photographer before becoming a Staff Writer. After graduating from Hopkins in 1987, Tully began a short stint at a community newspaper before becoming a sports editor with Gannett. He then led the PR efforts for the flagship franchise of the XFL in New York. Today, Tully is the Chief Operating Officer for a global marketing agency that represents some of the most recognized brands in technology. 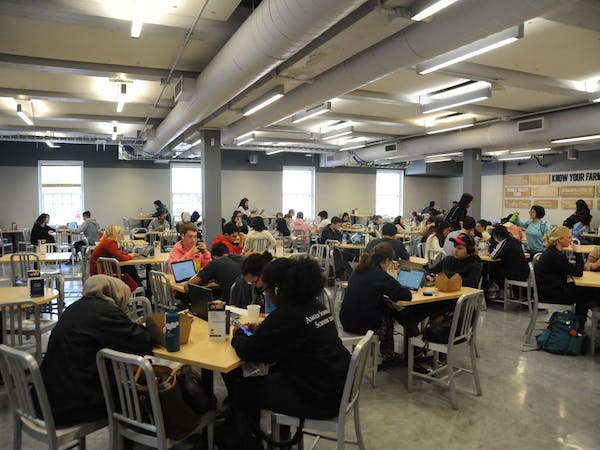 Gayle Cohen Cinquegrani joined The News-Letter shortly after arriving on campus in the fall of 1976, remaining on the staff until her graduation in 1980. During that time she worked on the news staff, serving as a news reporter (1976-78), News Editor (1978-79) and Contributing Editor (1979-1980). After attending law school she enrolled in the Columbia University Graduate School of Journalism. She then worked for Bloomberg Bureau of National Affairs, where she reported on employment law, the U.S. Labor Department and the legal industry. Cinquegrani is currently an editor at a research center affiliated with Georgetown University. 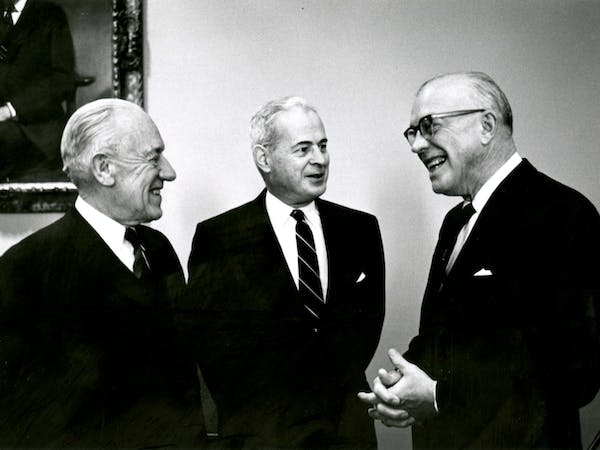 A conversation with Mark Reutter, Editor-in-Chief '71 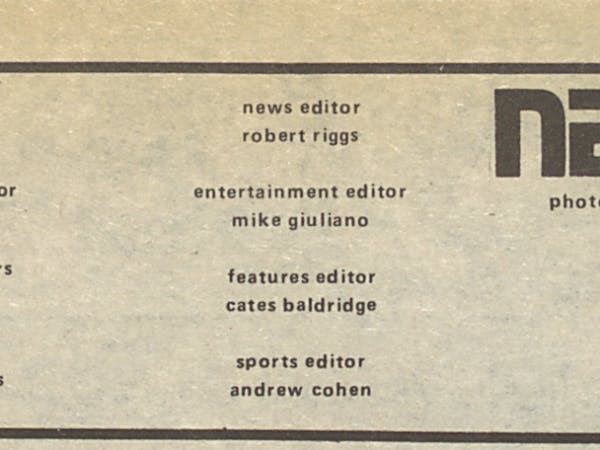 All content © 2022 The Johns Hopkins News-Letter | Powered by SNworks